Vogošća: Regulation of riverbed of torrential river Ljubine and the sanation of landslides in local community Gora

Minister of Economy of the Sarajevo Canton Muharem Šabić, alongside the Mayor of the Vogošća Municipality Edin Smajić, visited the works on regulation of riverbed of river Ljubine and the sanation of landslides. These two projects are being financed by the Ministry of Economy with 250,000 BAM.

Minister Šabić explained that the project includes a two way, permanent regulation of the riverbed of this river (100m length) and sanation of the landslides near the Gora elementary school which endangered the school object, and the highway and other residential objects as well.

„Works should be completed in the next 10 days, and after its completion, this area will permanently be protected from floods and landslides“ said Minister Šabić and he also announced that Ministry of Economy will finance the continuation of this project from its budgetary funds, because it's one of the top priority projects for the population of this Municipality.

Mayor Smajić said that the Vogošća Municipality has tremendeous needs for the regulation of its riverbeds, and specially riverbeds of its torrential river Ljubine. Its level rises to a few hundred times during heavy rainfall.

„Vogošća Municipality gives leverage to those projects that simultaneously regulate riverbeds and repair landslides that endanger residential objects and roads. In cooperation with the Ministry of Economy this project will continue, and the location near the elementary school in Semizovac will be our top priority“, said Mayor Smajić. 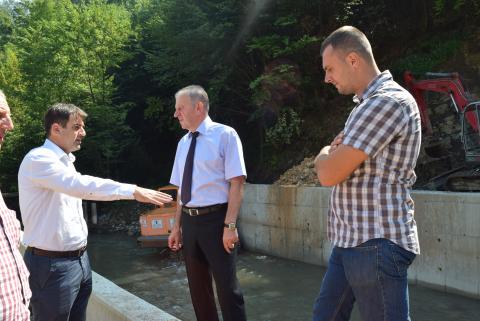