Delegation of the Sarajevo Canton led by the Prime Minister Konaković visited the “Holiday” Hotel: One of the symbols of Sarajevo gets back its golden glow

Delegation of the Sarajevo Canton Government led by the Prime Minister Elmedin Konaković visited the “Holiday” Hotel and talked to its owner Rasim Bajrović and his associates about the activities of last two months. These activities had a goal to give back the old golden glow to the most famous Sarajevo hotel.

“Our visit today has a manifold significance, because it’s, before all else, a serious business project. We are here, also, because of the fact that there are 110 people of different qualifications employed here. This is important to us (The Government of the Sarajevo Canton), and the whole system greets these kind of activities. On the other hand, a serious businessman has taken over one of the symbols of Sarajevo, which, unfortunately, has been totally devastated in the financial sense”, said Prime Minister Konaković.

He reminded on the fact that, in the moment this object was built, it had monopoly on the market because it was one of the rare hotels in Sarajevo, back then. He also reminded on the time in which this hotel was almost ruined.

After everything that hotel employees and management have been through, we consider its takeover by the head of the Europe Group a very brave move and because of this move we came here to express our direct support to the Europe Group. We also want to offer some other level of cooperation that we can establish. W are also very satisfied with the fact, that in such short time, they have managed to put this beautiful hotel in business again”, said Prime Minister Konaković.

The owner Bajrović said that he and the entire management and employees are very happy with this visit. He thanked the Prime Minister and to the ministers who came to support them.

With our investment and with our hard work we want to bring back the basic purpose of this object, its full social function, but also we want to bring back the responsibility of its employees. Today, we can already say that we succeeded, because in two months, we have managed to open 200 rooms (first five floors of the hotel along with the ground floor, conference halls, restaurants, cafe inn, parking lots, everything is ready. What is left is that in this period until the New Year we completely reconstruct these 200 rooms located from the sixth to the tenth floor. They will be completely new with new furniture, carpet, bathrooms”, explained Bajrović.

He announced a complete reconstruction of the pool and the fitness room. He also stated that the Hotel “Holiday” will be at its full capacity at the beginning of the next year.

“Until that moment, we will hire another 90 employees in order to complete the planned human resources capacity necessary for the functioning of the Hotel  (200 employees)”, said the owner Bajrović.

The Hotel will do business within the aforementioned Group which is consisted of hotels “Europe”, “Art”, “Astra” and “Astra Garni Sarajevo”.

The current occupancy of the Hotel is 50 percent, and the complete capacity of the Hotel (200 roms) is already filled during the Sarajevo Film Festival. The employees of the Hotel said that the demand for these rooms is higher than the supply.

The important thing to say is that this hotel employs 35 old workers. The owner had no obligation to take these employees from the bankruptcy proceedings, but he still decided to do so because he believes in their work experience, before everything else.

Minister of Economy, Muharem Šabić, Minister of Culture and Sport Mirvad Kurić, Minister of Traffic Mujo Fišo  and the Director of the Sarajevo Canton Road Directorate Nermin Drnda gave their personal support to this symbol of Sarajevo. 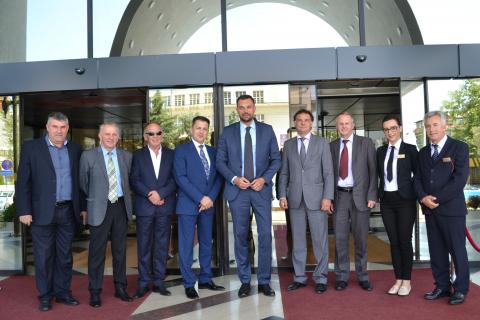